THE FEASTS OF JEHOVAH - WAVE SHEAF 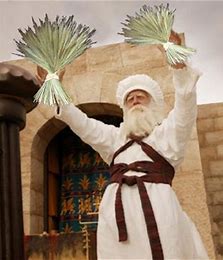 When Israel came to their land of promise and planted their crops, the first of the seed to come to maturity to be harvested was brought to the priest and waved over the people. This was the first fruits of the harvest, that others would come just like it, to maturity.

How does this apply to us today, as an Old Testament type?

He was waved over the people on the day of Pentecost when they heard the sound as a rushing mighty wind and cloven tongues of fire set upon each of them. The Holy Spirit was poured out – prophesy fulfilled – the apostolic church was born.

After 2000 years and at the end of seven church ages, at the end of Laodicea the Pentecostal age, the first fruits are waved again at the time of another resurrection.

God sends His message with a message that was waved over the Pentecostal people, calling them out of dead denominationalism that they were trying to go back into. Only a few would heed the call. The message was vailed to them by a vail of flesh, as it was with Christ.

It was not William Branham that was waved over the people, but the resurrected Christ, which is the Word. Represented In the days of the revealing of the Son of Man again upon the earth (Luke 17:30).

It was not the letter of the Word, but the life of the Word. Not a denomination of man, no man waved over the people, no pastor, no evangelist, not a holy man or holy church. But the Living Word, we heard, we saw it, we excepted it, and believed that we would come to the maturity of that same Word.

WHAT IS THE WAVE SHEAF TODAY?

We have been maturing under that Word, by the Spirit life in us. Many have made William Branham the Wave Sheaf, that is error, or some other man/men, or movement among us. It is the Word by the Spirit. A living resurrected Word.

The Wave Sheaf today is not the leadership of man, or a place we all gather and follow the same leader. It is not a favorite preacher, and it is ok to have them. It is not William Branham; however, we are gathering under the message he brought, an waved over us, the Word that moves us to our maturity in Christ.

The Wave Sheaf is not just a new movement of God, but GOD HIMSELF, in you – by the life of the Word that moves you. Not the flesh, but the soul of a man that has the Spirit of God.

That is the quickening power. The faith that was once delivered to the Saints.

NOTICE - A sermon by this title "The Wave Sheaf" is archived at Living Word Tabernacle website - www.livingwordtabernacle.com

And to be waved again, we realize, in the last day, according to Luke 17:30, in the Son day again, "in the day that the S-o-n of man will be revealed," or waved again over the people.

96    Hallelujah! I'm sure you see what I'm talking about. It was waved over the people. And the first time there will come forth, for the Bride age, for a resurrection out of dark denominationalism, will be a Message, that the full maturity of the Word has turned back again in Its full Power, and being waved over the people, by the same signs and wonders that He did back there.